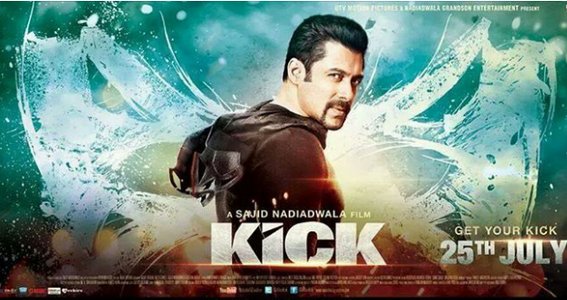 Rating
48
Average Critic Score
48
Rating
31
Average User Score
2 ratings
31
You have rated this
gulfnews  You don’t have to be a scriptwriter to know what happens next. You just need to leave your brains home and enjoy the story, if it can be called that. As the film ends with Singh saying, “don’t try understanding me, just love me”, please don’t try to understand a Salman Khan film. Simply, love it…Full Review by Manjari Saxena
Deccan Chronicle  Kick is an entertainer worth a couple of hours of your time on the weekend; more so if you seriously take to his dialogue ‘dil main ata hoon, samajh main nahi’. The film is endearing in bits, but rational? We’ll let you decide….Full Review by Sushmita Murthy
Rediff  The film is predictable, the script is lazily convenient, and yet there’s a surefootedness in the way Nadiadwala jauntily carries on increasing the tempo, piling on the Khan. His cinematographer shows some masterful framing and composition, capturing the energy of the moment very well most times, and at other times making things look very pretty….Full Review by Raja Sen
India.com  Kick could be a classic case study on how the Dabangg dude keeps churning out cores even by sleepwalking through a movie that demands to leave your brains at home. Watch it if you are a hardcore Salman Khan fan—or just to get a glimpse of the megastar’s devotees squealing with joy as their demigod unleashes his kicks in a movie that takes our intelligence for granted and tests our patience simultaneously! …Full Review by Prathamesh Jadhav
IndiaToday  Kick is unimaginative and unoriginal…Full Review by Suhani Singh
Firstpost  That’s basically what Nadiadwala expects audiences across the country to do: see their beloved Bhai (who is, helpfully, also called Bhai in the film) and not notice anything else, least of all how painfully idiotic the script, acting, stunts and twists in Kick are. No one expects the writing to be good in a Nadiadwala film, but Kick is just terminally lazy….Full Review by  Deepanjana Pal